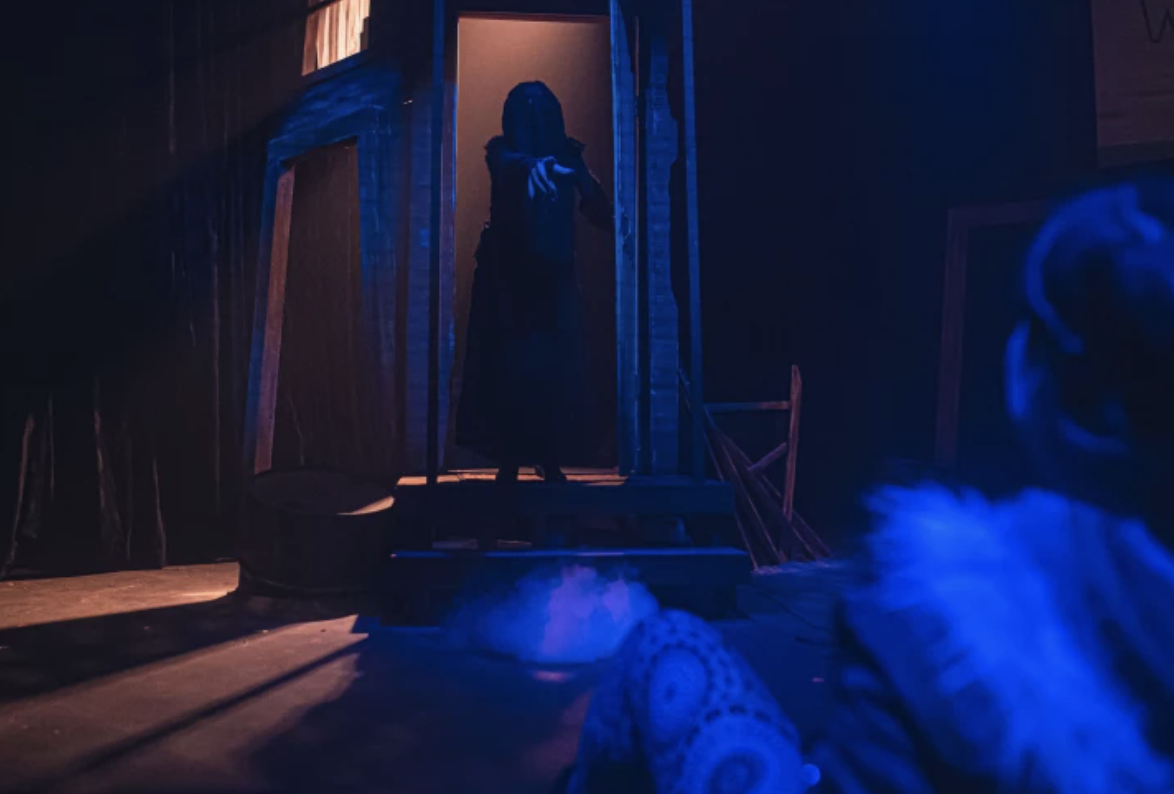 One of the first rules for an aspiring writer is to “write what you know.” That works extremely well for Tim Mulligan a first-time playwright whose supernatural comedy “Witchland” opened Saturday in its world premiere.

Produced by Backyard Renaissance Theatre at the Tenth Avenue Arts Center, “Witchland” pulls off a rare triple feat. It’s legitimately spooky, which is hard to pull off in a traditional theater production, its dialogue is natural and not overladen with plot exposition, and it’s very, very funny.

Mulligan based the 75-minute play on his own life. He grew up in Richland, Wash., home of the former Hanford nuclear plan where more than 56 million gallons of radioactive waste is stored underground. That’s the setting for “Witchland,” where the central family — a gay White male couple named Jared and Van and their adopted Black daughter Ali — relocate for work early in the play.

In real life, Mulligan and his partner, Sean, are White gay men raising a 17-year-old Black daughter in Seattle — about 170 miles from Richland — where they moved from San Diego in 2017. But unlike real life, Jared, Van and Ali have moved in next door to a veiled and surprisingly limber witch who puts a possession spell on anyone who touches the wood sticks piled by her front porch. During a drunken argument, Van dares Jared to grab a stick and Jared becomes possessed. It’s up to Ali to discover the source of the witch’s power and break the curse.

Andrew Oswald directs the production, which begins when audiences arrive outside the theater. Besides showing proof of COVID vaccination, attendees must sign a waiver, lest they get too terrified of the “supernatural forces” and “radioactive vapors” they may experience inside. Inside the lobby, actors in hazmat suits seem to be barely containing chaos inside the auditorium, where audience members walk around and beneath barrels of “toxic waste” to reach their seats. Along the way and during the performance, ticketholders might just be spooked by the witch or possessed Richmond teens who pop out beside, behind and even underneath show-goers at unexpected moments.

Daren Scott pretty much walks away with the show as Van, an out-of-work restaurant manager who falls off the wagon and increasingly drowns his troubles in oversize goblets of rosé. His hilarious tipsy confrontation with the witch is the highlight of the play. As Jared, Christopher Louie Szabo is sensitive and earnest and his physical embodiment of the curse is both eerie and disturbing. Amira Temple plays Ali as bright and brave.

Although I found the witch’s backstory confusing, I think “Witchland” is in great shape for a new play, especially by a first-time, and clearly promising, playwright.