Theater Notebook: A look back at the best in San Diego theater in 2021 Since 2003, the San Diego Theatre Critics Circle has collectively honored local theater productions, artists and designers at the annual Craig Noel Awards. But for the second year in a row, the annual awards program has been canceled because of the pandemic.

Instead, Critics Circle members like myself are writing their own top 10 lists to honor work that might otherwise go unsung in a year when even getting the doors back open was a Herculean achievement. Here’s a look back at 10 favorite shows and performances in San Diego theater in 2021. “The Garden,” La Jolla Playhouse: The Playhouse reopened with this visually stunning and haunting mother-daughter drama written by and co-starring Charlayne Woodard. Woodard has a charismatic, audience-interactive stage presence, the scenic design was gorgeous and the fast-moving play, co-directed by Patricia McGregor and Delicia Turner Sonnenberg, had a twist ending I didn’t see coming. “Ben Butler,” North Coast Repertory Theatre: Richard Strand’s play about a runaway slave seeking sanctuary at a Union fort in the early days of the Civil War doesn’t sound like a comedy, but it was both funny and dramatic in the hands of director David Ellenstein and his fine four-member cast. 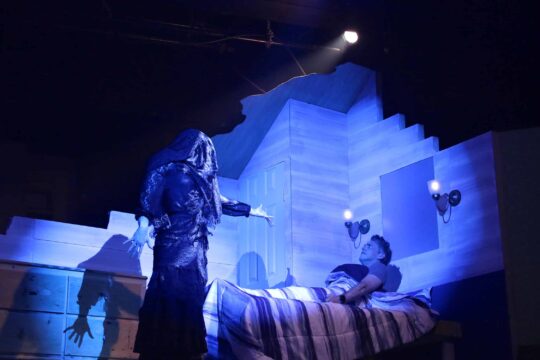 “Witchland,” Backyard Renaissance Theatre: Tim Mulligan’s unique horror comedy-drama gave audiences a reason to get off their couches to experience live performances again. Directed by Andrew Oswald, this spooky and immersive world premiere play was about a family living next door to a very creepy witch, who spooked audiences by unexpectedly popping up just about everywhere inside the Tenth Avenue Arts Center. The cast of “The Gardens of Anuncia” at The Old Globe.(Jim Cox)

“The Gardens of Anuncia,” The Old Globe: I loved Michael John LaChiusa’s touching and beautifully staged musical. It was inspired by the 1940s Argentina childhood of his longtime friend and collaborator, Broadway legend Graciela Daniele, who directed and co-choreographed the show. My only complaint was that I had too many unanswered questions at the end of this too-brief, 90-minute show. Jenna La Rosen as Belle and Michael Deni as Beast in Moonlight Stage Productions’ “Beauty and the Beast” at Moonlight Amphitheatre in Vista.(Adriana Zuniga Photography) Miles Henry and Justine Sombilon in Moxie Theatre’s “I and You.”(Courtesy photo)

“I and You,” Moxie Theatre: Lauren Gunderson’s quirky, deeply moving and mysterious play is about a dying teenage girl who’s fighting so fiercely to stay alive, she won’t let anyone inside her heart, until a persistent classmate and the poetry of Walt Whitman eventually break through. Callie Prendiville’s stage direction transcended the usual limitations of plays on film. “Nicholas, Anna and Sergei,” Hershey Felder Presents for San Diego Rep: One of more than a dozen filmed plays written, co-directed and performed by Felder since the pandemic began, this sumptuous production on the little-known life of Russian composer Sergei Rachmaninoff had an international cast, stunning location shoots in Florence, Italy, gorgeous music and even subtitles for the scenes with Russian dialogue. “Songs for a New World,” Teatro San Diego: This year-old diversity-focused theater company impressed with its debut production, a filmed staging of Jason Robert Brown’s eclectic 1995 musical “Songs for a New World.” Director Kevin “Blax” Burroughs reimagined the scenes — about people through history about to make life-changing decisions — from a 2021 perspective. Bibi Mama wrote, co-directed and starred in her play “The Mango Tree” that is kicking off Moxie Theatre’s 2021-2022 season with virtual streaming.(Moxie Theatre)

Pam Kragen writes about theater for the San Diego Union-Tribune. To see other Critics Circle members’ top 10 picks for 2021, visit our Facebook page at: facebook.com/sandiegotheatrecriticscircle